April 2012.  The United States Environmental Protection Agency (USEPA) has just announced its intention to rule that new power plants will be required to produce electricity with emissions limited to 1,000 pounds of CO2 per megawatt hour of power.  Our O2/CO2 combustion system has high enough efficiency in most applications to meet this new limit when burning coal, natural gas, other hydrocarbons and biomass without CO2 recovery.  With CO2 recovery and in combination with our new biomass growth method, virtually all CO2 generated in fuel combustion is converted to a 50% carbon biomass and dried for fuel.  This method of economically using the CO2 eliminates the problem of qualifying to meet the USEPA standard for new power plants.

We are often asked to explain why our O2/CO2 combustion system is so much more efficient, more than 50%, compared to less than 30% for the alternatives called "Oxy-Coal", "Oxy Fuel Combustion" or "Oxycombustion".(1)   These concepts are being developed in the United States and several other countries in preparation for possible controls on power plant CO2 emissions.  Costly deep underground sequestration of the CO2 is being proposed.  We have studied coal-fueled power plant emission problems since 1978 and by 1991 we thought that oxygen combustion rather than air had possibilities if low efficiency problems could be resolved.  In 1993, we learned of a potentially applicable Japanese Patent No. 19026 granted in 1975.   A similar combustion method was researched and demonstrated by Argonne National Laboratory in the 1980s on an old coal-fueled stoker boiler in South Dakota.  Funding was by the United States Department of Energy (USDOE).  Efficiency was not considered.  Japanese research (1992) on the method of their 19026 patent, after improvements, disclosed an efficiency of only 30.9% and that low rate has discouraged further development in Japan to this date.  In the United States, the similar "FutureGen 2" project for a power plant site at Meredosia, Illinois, has been announced with $1.0 billion of funding by the USDOE, of the projected $1.6 billion total cost including underground CO2 sequestration.  Data so far published on FutureGen 2 indicates an efficiency below 30% before CO2 disposal.  After planned CO2 separation, compression and sequestration, overall plant efficiency will be less than 25%.  Other demonstrations, for example at Vattenfall in Germany and at Callide in Australia, will have similar efficiencies.   The Jupiter Oxygen/USDOE high temperature "Oxy-Combustion" method, if demonstrated at commercial scale, will have the highest costs and lowest efficiency of these several oxygen combustion methods.  See the end notes (1).  The common problem is that they all utilize non-condensing boilers and require separate pollution control equipment.  Waste heat losses are large in all of these combustion methods.  Our process makes use of a unique condensing boiler which embodies waste heat recovery, particulate recovery, sulfur oxide reduction and acidic condensate separation.  The condensate, and also the excess CO2 not needed for recirculation with oxygen to control fuel combustion temperature, go to our water purification process where algae biomass is grown for fuel, feed or food.  Patents are pending.

The largest portion of efficiency gain to be achieved with our O2/CO2 combustion condensing boiler is due to waste heat recovery as detailed in U.S. Patent No. 6,907,845.  This usually lost heat reduces both fuel and oxygen requirements by half and in some applications by more than half.  We are estimating that when O2/CO2 combustion is optimized under our patents and with recent improvements, and when CO2 is recycled to biomass growth and utilization, then overall plant efficiency may exceed 80%.

Unproven capital-intensive projects like ours cannot be financed in the U.S. under present conditions.  Since 1992 our approaches to the USDOE for assistance have been unsuccessful.  Their response to our March 24, 2010 research grant request was negative, claiming that our technology had already been demonstrated, which is false.  General Partner W.P. Krebs protested in a letter to USDOE Secretary Steven Chu but received no reply.

We look forward to the emergence of our own technologies to increase the efficiency and reduce the costs of electric power production with hydrocarbon and biomass fuels.  The combustion byproduct CO2 may be used to purify wastewater by photocatalysis and photosynthesis, rapidly growing algae to produce useful biomass.  Here it is: 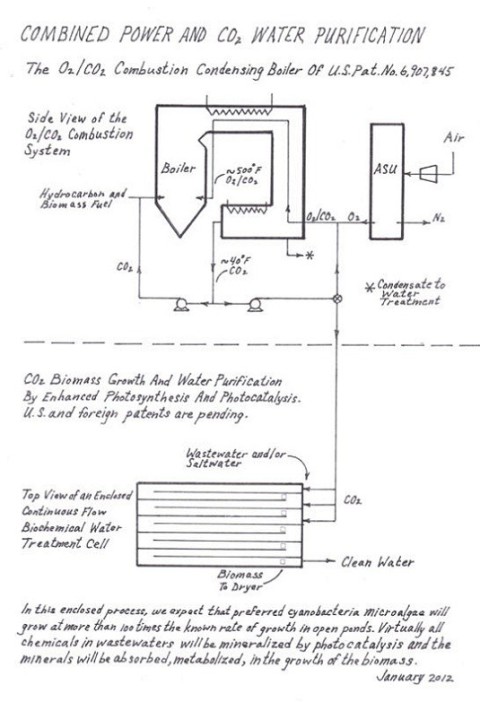 (1) End Notes.  We omit from this combustion efficiency discussion the state-of-the-art air-fired sub-critical boiler systems which are about 34% efficient when using the best available emission control technologies.  We exclude the costly Integrated Gasification Cobined Cycle (IGCC) system.  These concepts can only separate and recover CO2 at great expense by known means.  We do include the Jupiter Oxygen/USDOE Oxy-Fuel or Oxy-Combustion concepts of U.S. Patents No. 8,038,773 and 8,087,926.  This technology demonstration is 80% funded by the USDOE's National Energy Technology Laboratory (NETL) with more than $8,000,000 so far committed to research on a small-scale project.

We evaluate energy technologies by comparative analysis of published information.  For the Jupiter/USDOE Oxycombustion project, this novel combination of a high temperature aluminum refining furnace with a unique pollution control process has made comparative evaluation difficult.  But enough has been disclosed to show a complex system with very large heat losses for cooling and large power requirements for compression.  The power plant parasitic electricity needed before CO2 compression may exceed 50% of total electric power generating capability, yielding a net plant efficiency of less than 25%.  After CO2 drying and compression, electric power efficiency will only be 15 to 20%.  The actual operating efficiency when scaled up will not be known for 5 to 10 more years when a 100 megawatt or larger plant is operational, at a further expenditure of several hundred million dollars.

So by the comparative anaysis of the information published to date, we have evaluated these oxygen combustion processes for efficiency, including CO2 recovery, separation and compression for sequestration as follows.  The Japanese concept of 1975 with follow-up research (1992) sets the standard at 30.9% efficiency followed by Meredosia, Vattenfall and Callide at about 30% before CO2 compression and possibly 25% thereafter.  The Jupiter/USDOE method is not likely to reach 25% efficiency before CO2 compression nor 20% thereafter.  This is because the combined waste heat losses and energy charges for compression will be too great at any scale.  Also the relatively high complexity of Jupiter/USDOE should substantially lower reliability when compared to other power generation methods reviewed.  Greater complexity also means higher capital and operating costs.